When I was a kid growing up in North-central Florida, there was Six Gun Territory, Silver Springs, Cape Kennedy and Marineland. No Disney, Universal or SeaWorld. Any overnight stay at the beach usually meant a visit to Marineland, located between Cresent Beach and Flagler Beach.
Marineland was developed in 1939 as Marine Studios by one of the Vanderbilts. The Studio moniker was soon dropped and it morphed into Marineland, "The World's Only Ocenarium." It had huge round metal tanks with portholes in the sides for viewing oceanlife. You could watch divers in those cool old diving suits feed animals on the bottom of the tank. But the coolest of all was the trained dolphins and Pilot whales that would literally jump though hoops and do seemingly whatever their trainers asked of them.
I took memories of our trips to Marineland with me to school everyday, because I had the dynamic die-cut dolphin logo sticker on my notebook.

I did not return back to Marineland as adult until the mid '90s. By that time the metal tanks were rusty and the portholes all leaked. The crowds had obviously fallen away over time as the Florida Turnpike and advertising machines of Orlando's attractions siphoned away the masses from Florida's east coast. The highlight of that visit was the lounge that had a bar shaped like a boat on hydraulics that rocked back and forth on gentle imaginary waves. 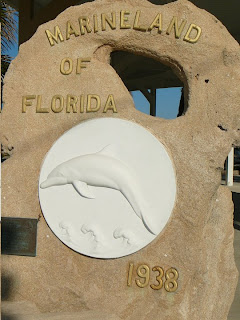 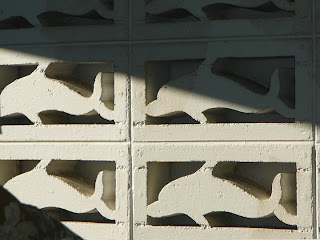 The state stepped in soon afterwards and knocked down all the rusty metal tanks and turned it into a research facility and "Eco" park, similar to SeaWorld's Discovery Cove. I stopped by recently to see what was left of my childhood memories and the answer was, not much. The entrance to the gift shop looked familiar, as were the dolphin shaped bricks behind the snack bar but little else remained from the early days of this treasured attraction.
Posted by Rick Kilby at 7:58 AM