Looking for the old in New Tampa 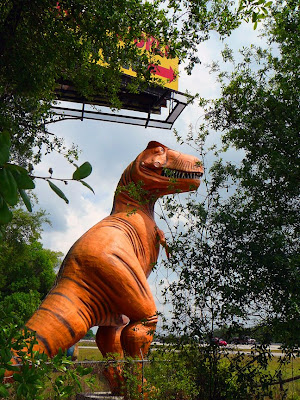 Okay, so I'm a hypocrite. I love the blue highways for scenery and nostalgia, but for speed and convenience, nothing beats the interstate. So my latest Florida journey started on I-4 west. But at least there are some interesting roadside sights along the way.
First there is Dinosaur World near Plant City. It's off the same exit as one of my favorite restaurants of all time, the Branch Ranch. One of those sprawling eating establishments that started out in someone's home and just kept growing and growing, it featured homestyle country cookin' and massive portions. To my great sadness, it closed a while back after fifty years of fillin' bellies.
Dinosaur World, although a relatively recent roadside attraction, is in the spirit of a good old-fashion Florida tourist trap. It's colorful prehistoric behemoths call the interstate traveler to stop - I've wanted to pull over every time I drove by. So I finally did, but only to take some photos near the parking lot. 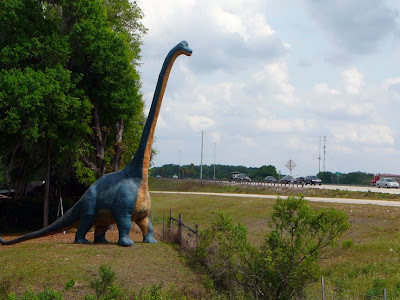 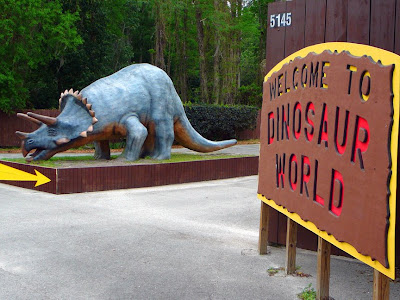 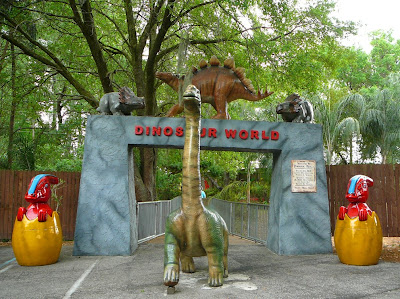 The next interesting I-4 roadside site is Florida's version of the Cadillac Ranch made of Airstream trailers. Photo by my wife, I was busy driving. 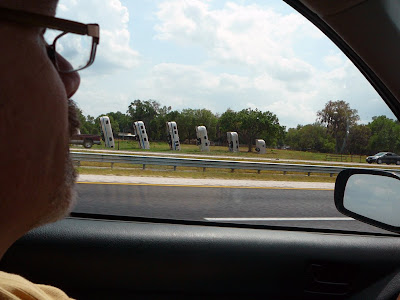 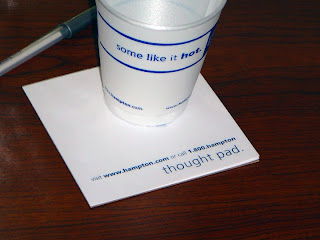 Our destination was New Tampa. I never knew there was such a place as New Tampa, I guess the Tampa I'd always known is the old Tampa. In New Tampa, everything is well, new of course. It looks liked they carved some roads out of old Florida wilderness and plunked down new stuff everywhere. The wilderness has not been completely tamed as our friends who live there often have issues with wild hogs in their neighborhood. And we saw a 6 foot alligator approach the road on all fours in an attempt to cross, something I've never seen in over forty years of Florida residence. But most of New Tampa is new roads, new stores, new restaurants, new hotels. Brands everywhere. Our hotel was so branded that they had clever little taglines on every single element, including the coffee cups and notepads.

Everything was new except for one very notible exception, the art gallery run by Hong Kong Willie. Nothing there is new, as everything is created from recycled materials. We saw this crazy out-of-place establishment, nestled right by I-75, and had to stop in. There is no signage at this outsider art environment, except the "GOOGLE HONG KONG WILLIE" painted on the back of an art car in the front. The owner of the establishment, an aged hippie named Joe, opened up the gallery for us to look around. The space, a former fishing tackle store, still has fishing tackle and incredible stuffed fish amid the artwork, mostly handpainted signs, burlap tote bags and ashtrays made from old 33 records. (Note: I'd love to have shown pictures of the inside, but I was asked us not to photograph the interior- you'll have to visit his Etsy site to see the art for yourself!) Willie, aka Joe, explained that everything sold there is made of sustainable materials and showed us some of the ingredients, like coffee bags shipped from South America. The environment alone is worth stopping for, from thousands of fishing floats, to an old helicopter, to Willie's own tribute to 911. It's obvious that these folks are working hard to keep up with the rest of New Tampa, making new stuff from old. Way to go brother. 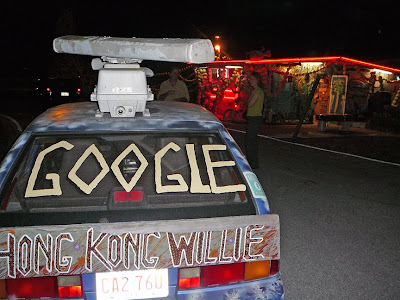 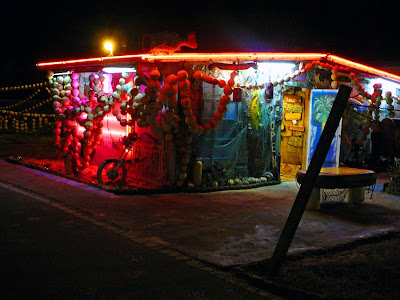 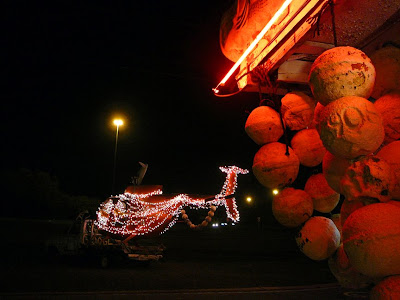 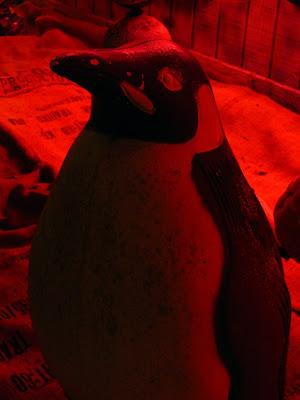