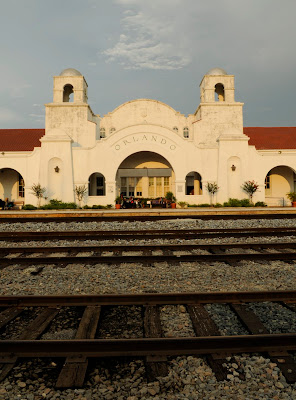 The flat screen TV at the gym was tuned to Wheel of Fortune, and as the contestants were introduced I noticed some familiar type behind them. The long-running game show is in Orlando filming at SeaWorld and the giant video wall behind the contestants projected the facade of the Orlando Train Station during the opening segment of the show. Ironically enough, the train station is right across the street from my gym. The backdrop image was carefully masked so as to not show the two towers that are in bad need of restoration. Aside from an image of Shingle Creek, the only other image of "real" Orlando shown in the background was Orlando's Leu Gardens. I'll save that topic for a future blog.

Image by Kilby Photo
Posted by Rick Kilby at 9:45 PM