Home for the Good Times 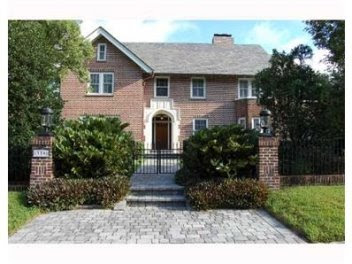 Yesterday was gorgeous so my wife and I went for long walk before it got dark. We covered much of the older neighborhoods south of downtown and found this huge home for sale near Lake Cherokee. Five bedrooms, seven and a half baths and a history for 1.5 million. Built in 1924 it is known as the Slemons house and is a fine example of American Tudor Revival architecture.
The name Slemons is very familiar to me because I spent many hours escorting film crews and directing photo shoots in the Slemons building in downtown Orlando. Located at the corner of Church Street and Garland Avenue, the Slemons building for many years was know as Rosie O' Gradys. Originally the bottom floor was some sort of department floor and upstairs was a hotel. When I worked there in the '80s and '90s, Rosies was on the ground floor, the second floor had a balcony with more seating and a bar and the top floor was offices. The band and performers had rooms on the 3rd floor and the room with the infamous fire pole was located there. I remember what a big thrill it was to slide down the fire pole. 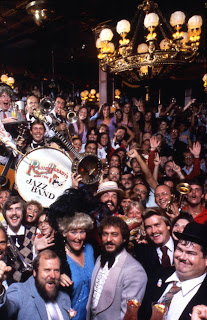 Rosies was the room that launched Church Street Station, the cornerstone from which Bob Snow built his downtown entertainment empire. Unfortunately by the time I was working there, the popularity of Dixieland Jazz was waning and our guests seemed to prefer the Country and Western themed Cheyenne Saloon to Rosies. So I never knew Rosies when it was THE place to go in Orlando. And if I was in Rosies at night, I was there at least twelve hours after my work day began, so I cannot shake the association between Dixieland and long, tiring work days. To this day, I still wince whenever I hear a banjo.
The last incarnation of the Slemons building was a Comedy Club. It now sits vacant, anchoring nothing, the good times quieted by the constantly changing fortunes of what was once Church Street Station. The historic property has new ownership, again – who knows what the future holds for the Slemons building... or the Slemons house.
Posted by Rick Kilby at 7:12 AM