Where is City of Cars? 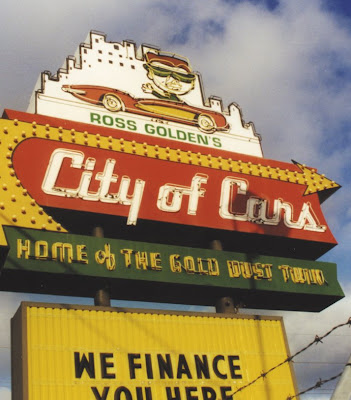 In my explorations around Florida looking for vintage neon, I found two ways to usually locate good signs. First is to look on an old US highway that runs north-south down the main peninsula, because those were the major routes before the interstate highway system. The second method is to find the main commercial road in cities or towns (or what would have been the main road in the past.)
Colonial Drive or Highway 50 fits the later description in Orlando. The north-south roads going though town were Hwys 441 and 17-92. Hwy 50 runs east to west, pretty much from one side of the state to the other. Titusville and Cape Canveral at one end, Brooksville and Weeki Wachee at the other.
Few remnants remain from mid-century Central Florida remain on Colonial. One of our favorites used to be the City of Cars sign. In addition to the funky sign with the cute illustration, they had several "sputnik" like signs in the parking lot. Signs like this that rotate are called Rotospheres; but this one is more of a satellite sign. 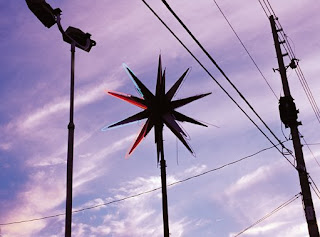 I drove by yesterday and confirmed that all that is left is the used car lot and all the signs are history. And I wonder where they went? In the dump? In someone's personal collection? I hear a rumor that vintage neon is highly collectable in Japan. And some of Central Florida's best signs are said to be held in a warehouse owned by the Morse Museum in Winter Park. Or is there a sign graveyard somewhere, like the famous boneyard in Vegas? Keep your eyes open, these signs could be anywhere!
Posted by Rick Kilby at 6:35 AM