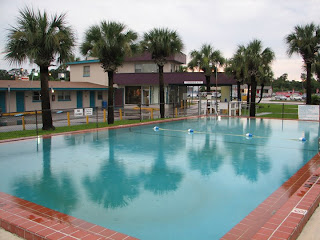 1.) The Arrow Motel
My friend living in the Arrow Motel tells me that it is actually a unique little community, despite being in such a run-down part of Orlando.  He says living in the Arrow is "totally safe and secure, despite the appearance of the opposite." He trusts his neighbors because "it is impossible to hide who you are because we all live in the same fishbowl."  First, I must apologize for the assumptions I made about the living conditions there based solely upon the reputation of the Trail. Second, I really want to visit and meet the folks who live permanently in a vintage Florida roadside motel!
2.) Florida Forever
Florida's Governor, Charlie Crist, surprised me by vetoing the proposed cuts that would virtually wipe out the Florida Forever program. It's nice to read some good news in the paper for once! 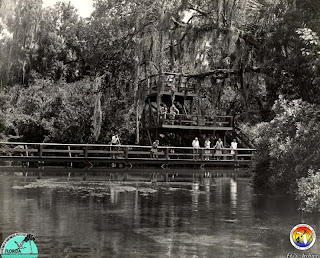 3.) Homosassa Springs
I found this image of Homosassa Springs, before the Fish Bowl was built, on the Florida Geological Survey website.
4.) Houses for sale
All 3 historical Orlando homes, I've blogged about are still on the market. And I learned that the one home I was told housed Buddy Ebsens' family's musical school, was perhaps not the correct location of said school.
5.) St. Johns River
The battle for Florida's water is really just beginning. Here is a fine article giving reasons for not using the St. Johns River as a source of drinking water.
6.) Peace Tower
I'm not sure where I got the term Peace Tower, it's really called the Placid Tower.
7.) Presidents Hall of Fame
I posted some video from the presidents Hall of Fame in Clermont and meant to do a more in-depth blog about it later. This article on RoadsideAmerica.com, an excellent online resource, does a better job than I would have. And it is written by a highschooler. I'm impressed and hopeful for the next generation of roadside aficianados. 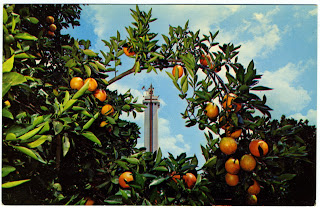 8.) Citrus Tower
I acquired this vintage postcard of the Clermont roadside attraction. I think perhaps there was some manipulation of the orange tree limb.
Posted by Rick Kilby at 8:47 PM