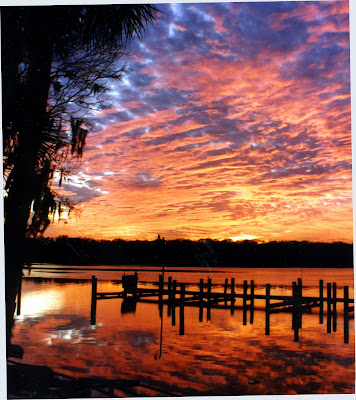 I can remember very few jokes, but one that has always stuck with me was popular when the Georgia Bulldogs dominated the Florida Gators in football year after year. "Why does the St. Johns flow north? Because Georgia Sucks!"
One of the few rivers that flows north in the US, the St. Johns is called a lazy river because the total drop in elevation from its source to its mouth is less than 30 feet. This slow flow also makes it difficult for the river to flush itself of pollutants.
My relationship with the river began when I was in elementary school. My parents decided to buy a place on the river in a little town called Welaka as a weekend getaway. It was an hour and twenty minutes from our home in Gainesville and light years away from the social life I craved as a teenager. Looking back on it now, however, I wouldn't change a thing, the place was magical.
I saw my first manatee there. Attempted to water ski. Drove a boat and had my own little fiberglass jon boat. Hunted Lubers and water snakes with my BB gun. Picked up ancient indian pottery shards when the water level dropped. Got scared by a Cottonmouth. Saw my dad squish a rattler with our car. Learned to drive. Walked to the convenience store to buy comic books. Went to the little aquarium again and again. Used my allowance on fishing tackle. Caught my limit in Stripers at the Croaker Hole, a rare salt water spring. Waded through Water Hyacinths at eye level to get to a spring with a rope swing. Saw giant catfish and gar in the crystal clear Oklawaha river. Laughed like crazy when our steering cable broke on our boat and we went careening into the shore of the same river. Walked into a sliding glass door while spying at girls by the pool. Caught Blue crabs in crab traps with hot dogs. Witnessed my favorite sunset of all time.
My memories on the St. Johns and of growing up are one and the same. From where we were, we faced the Ocala National Forest, and the river seemed wild and full of life. Today there is much debate over tapping the river down here in Central Florida. One side says it will take pressure off the shrinking aquifer. The other says that the environmental damage could be catastrophic. I don't know which side is right. I just hope that tomorrow's kids get the same opportunity to make incredible memories on the river like I did.
Posted by Rick Kilby at 7:16 AM