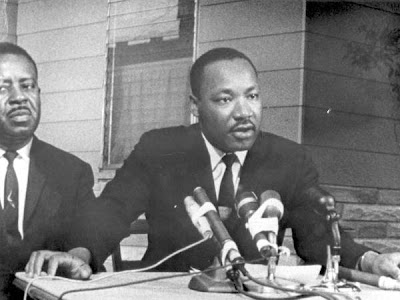 While in St. Augustine over Thanksgiving I noticed a sign in front of the Hilton that noted the site was the location of a sit-in by Martin Luther King, Jr. in 1964. One thing I really love about that city is the layers upon layers of history and I was pleasantly surprised to find some twentieth century history, right there near the restaurant where we were having breakfast.
But after a little investigation, it turns out that perhaps the city of St. Augustine downplays this episode of its past, because it is pretty ugly.
1964 marked the 400th anniversary of the creation of St. Augustine and the city wanted to mark the occasion with a celebration funded by the Federal government. As the city was still heavily segregated at the time, and its economy depended on tourists from up north, King saw an opportunity to draw attention to the civil rights movement started in the city a year earlier by the local NAACP. The movement, led by a local dentist, featured sit-ins and demonstrations and led to counter demonstrations by the KKK that resulted in the outbreak of violence.
The protests went on and the violence increased and in May of 1964 MLK and the Southern Leadership Conference tried to get federal intervention in the city to ensure the rights of protesters to march in safety. The situation culminated in two events at the Monson Manor Lodge, located where the Hilton is today. On June 11th MLK and 7 others were arrested at the motel's restaurant after being denied service. And then a week later, when they returned to try to desegregate the pool, the motel manager poured acid into the water to prevent them.
The effects of the events in St. Augustine culminated in the announcement of the creation of a state sponsored biracial committee to review the issues of the troubled city. The committee never met, but it's formation allowed the civil rights movement to move on to Alabama. And the publicity generated by the events in the nation's oldest city helped to end the filibuster in the US senate over civil rights legislation.
I wish Dr. King would have lived long enough to see history being made tomorrow.
Click here to read about Martin Luther King, Jr.'s 1964 visit to Orlando.
Posted by Rick Kilby at 8:08 AM