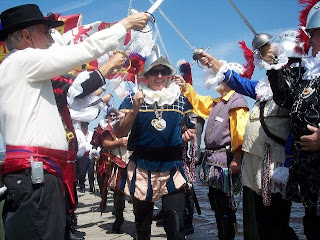 I was talking on the phone to my mom yesterday and she mentioned visiting Ponce De Leon Park in Punta Gorda, Florida. It appears that Punta Gorda may in fact be the Ponce De Leon capital of Florida. Not only do they have park named after the famed Spanish explorer, they have a second park with a large Ponce De Leon statue and, best of all, a whole club named in his honor.
It turns out that Ponce landed in Charlotte Harbor in Southwest Florida in 1513 and again in 1521. The first European to die in the continental United States passed away near Punta Gorda and there is a historical marker at Ponce De Leon Park to commemorate his passing. 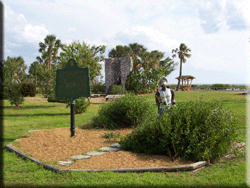 The larger than life size statue of Ponce in Gilchrist Park is the result of the efforts of the social club, known as The Royal Order of Ponce De Leon Conquistadors.  The Conquistador website says the organization is "dedicated to the preservation of the Spanish heritage of Charlotte County and Florida." To me it looks like a group of guys who just like to dress funny and have a good time. But, as we'd say down here in Florida,  there ain't a damned thing wrong with that! 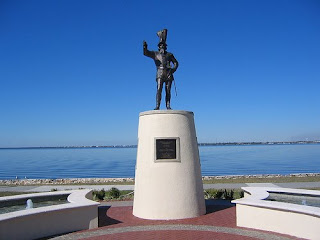