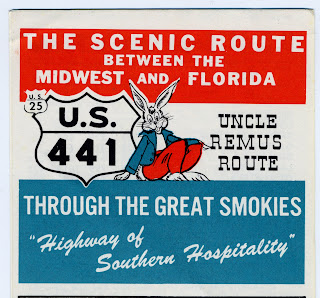 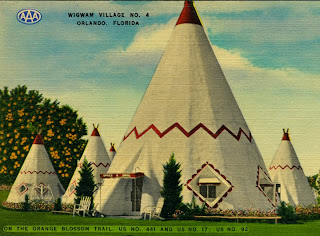 One of the main US Highways coming into Florida in the pre-interstate days was 441. In Orlando it goes right through the heart of town and is known as the Orange Blossom Trail. Back in the day, the section through Central Florida had motels, restaurants and attractions to entice the traveler to stop. For instance, the kitschy Wigwam Village was on 441, close to where the Trail now intersects the 408. Unlike its counterparts in Arizona and Kentucky, our teepee motel did not survive.
A couple miles down the road lies Gatorland, a vintage attraction which despite a fire last year, continues to thrive. In my estimation, it is the most successful of Florida's independent roadside attractions, still operated by its original owners today.
Between the site of the Wigwam Village and Gatorland, both literally and figuratively, lies the Arrow Motel. My friend lives in the motel today and photographed the newly re-painted sign. While I wouldn't say it is the most prosperous motel on 441, it is one of the very few that still has working neon. The vintage postcard shot of the Arrow has an innocence to it – freshly planted landscaping, very little clutter, everything looked nice new and tidy. The back reads: "58 modern spacious units, tastefully furnished, wall-to-wall carpeting, room phones, T.V., air conditioned, heated, swimming pool. Service station. 24-Hour Restaurant." Of all those amenities, it is my guess that only the T.V., AC, carpet and maybe the pool remain.
Today the Trail is associated more with prostitution than tourism and despite the efforts to dress up the road with fancy light poles and spiffy intersections, that arrow has been pointing down for a number of years. 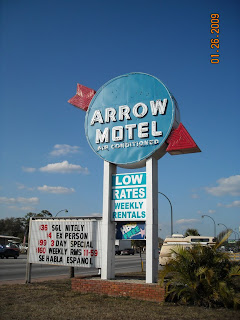