The demise of a native 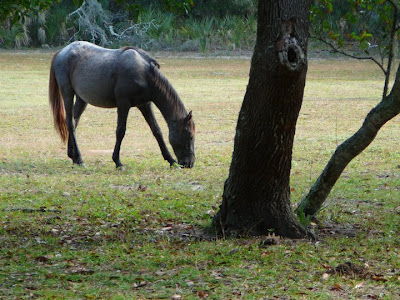 Near Thanksgiving of 2007 my wife and I visited Cumberland Island, GA, just across the state line from Florida. The island, the one time private playground of the Carnegie family, is now part of the National Park system and features the largest stretch of undeveloped coastline on the Eastern seaboard.
In addition to the pristine beach and decaying 19th c. architecture, it is known for the wild horses that are descended from the animals that the Carnegies brought over for their personal pleasure. They are beautiful to watch, but as the horses are non-natives they strain the island's delicate eco-system. The result is that the resources of the island cannot support the entire herd and sometimes the horses die of starvation. The park system proposed removing the herd, but there was such a huge public outcry that the horse were left alone. So the park system only interferes if a horse appears to be suffering.
I gathered this information on an excellent guided ranger tour. On our walk across the island, the ranger pointed out many dead trees across the landscape. They were very obvious with big dead leaves amid the thriving greenery of other trees and plants. The ranger explained that those were native redbay trees that had died because a non-native fungus from Asia came to North America aboard an Asian beetle that jumped off a ship in the port in Savannah. With no known way to stop the spread of this fungus it has spread like wildfire and will soon reach Central Florida wiping out redbay, sassafras and avocado trees. This in turn will contribute to straining native wildlife like the spicebush swallowtail butterfly and cedar waxwing, which utilize these trees. And ultimately the avocado industry in South Florida will be wiped out. 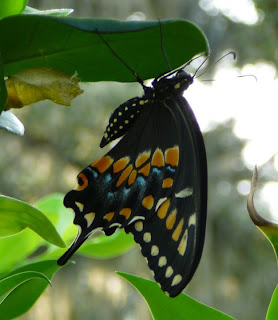 In an an article in todays paper, a professor at UF urged people to go out to see the native redbush and sassafras while you still can, because nothing we can do can stop the blight from spreading south. Having seen the results of the fungus on Cumberland, I can say from firsthand experience, it is very ugly and very sad. 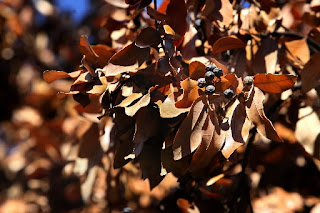