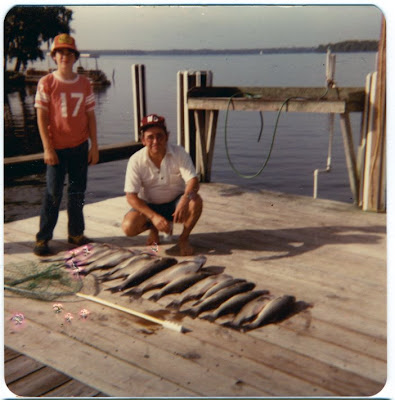 Not all Florida's springs are deep clear pools or roadside attractions. The Croaker Hole is a salt water spring in the middle of the St. Johns River, south of Little Lake George. You either have to be an old timer who knows the spring's exact location or have a depth finder to find the deep hole in the surrounding 5-9 feet of water. The water in the St. Johns is root beer color, and there is no way to visually see this spring.
It's called the Croaker Hole because you can catch Croakers there which are a salt water species of fish. Other species normally found in salt water that like to hang out at the spring include shrimp, Blue Crab and Striped Bass.
My most productive fishing trip of all time was an excursion to the Croaker Hole when I was a kid and my dad and I pulled out 15 Stripers and Sunshine Bass. Sunshine Bass are a hybrid that are spawned in captivity and released into the St. Johns by the Florida State Fish Hatchery. Slightly smaller than Stripers, Sunshine Bass can be identified by the broken stripe on the side, whereas Stripers stripes are uninterrupted.

I'm not sure if we were ignorant of the fishing limits, or just ignored them, but we should have only pulled out 6 fish apiece. I think perhaps we were caught up in the moment and weren't aware of how many fish we had. Anyway of the 15 fish, my father caught 12. I never could figure out how we could have the same bait and be at the same spot and how he would always catch all the fish. I guess some people are just natural fisherman, and my pops is.
The excitement I felt that day, pulling one fish after another into the boat, made it understandable to me how one could get addicted to the sport. It's easy to see how in the days before television, computers and theme parks, one of Florida's biggest attractions was its fishing.
Posted by Rick Kilby at 7:24 AM