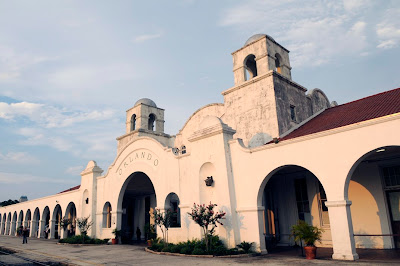 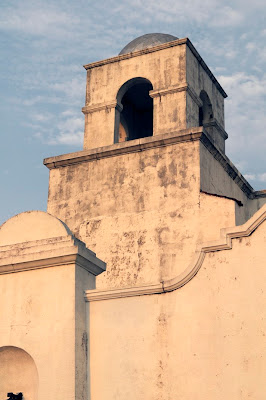 Once again, our state legislature has a big decision to make about Florida's future. This time the issue before them is light rail proposed to ease Central Florida's traffic gridlock. Last time this came up, the issue was defeated by a legislator from Leesburg who didn't want more freight cars rolling through her town and the powerful lobby for the state's attorneys who didn't like provisions in the bill that would prevent lawsuits. The Sentinel is doing a series this week on the challenges faced to the bill and today issued an editorial in favor of moving ahead with the project.

In the print edition, the editorial is illustrated with a rendering of Orlando's Health's commuter stop with Orlando's 1927 train station in the background. Orlando Health is what used to be known as ORMC, a complex of healthcare facilities just south of downtown.

Our train station is one of the most significant buildings in Orlando. Patterned after the mission-type train stations in the Southwest, our train station is remarkably similar to the station I saw in Albuquerque this fall. Created to appeal to the influx of Northerners disembarking in Florida in the '20s, the station is noted for its "arcade, prominent parapet arrangement, and flanking bell towers" according to Orlando History in Architecture, a 1984 book created by the City's Historic Preservation Board.

I had never really explored the station until a recent photo shoot with my brother. It is great building with lots of charm but it has really fallen into disrepair. The decay is well-documented in this blog by Chris Gent. It would be a tragedy if this remarkable facility were to be lost, for Orlando has so few iconic historic structures. I'm in favor of the light rail bill, if only to save our beautiful train station.

Photos by Kilby Photo
Posted by Rick Kilby at 7:46 AM