From fishin' to phosphorous to fishin'? 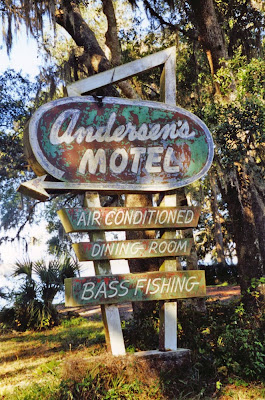 As a kid growing up in the sixties and seventies, I grew up liking chains. I loved franchised stores, restaurants, hotels, etc. because that's where everyone else went and I wanted to be like them. My dad, however, liked to get off the interstate at some little town, drive to the town square, and eat at the greasiest little diner he could find. As a kid I was horrified. Only today do I see my father's wisdom.
So I don't have fond childhood memories of the trip when we stayed in a fish camp on the St. Johns River. I remember boredom, summer heat and lots of fried, bony fish. The fish camp was called Angler's Paradise and it was located in Georgetown, Florida. I would have preferred to stay in a Holiday Inn with a pool and vending machines near an interstate and a McDonalds.
But as I matured and spent more time on the river, I learned to appreciate the subtle beauty of the St. Johns and now I see fish camps like Angler's Paradise as vintage Florida. There were several fish camps around our place in Welaka Florida including Andersons, which as far as I know is still in operation and has a great little restaurant on a bluff overlooking the river. 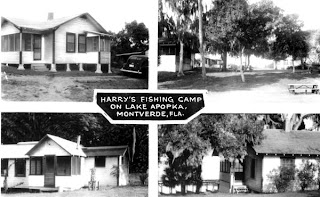 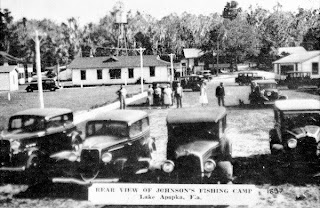 Fish camps were a big deal in Florida's tourist past and a great example was Lake Apopka, Florida's fourth largest lake. According to Wikipedia Lake Apopka was one of of Central Florida's main attractions through the 1940s, boasting 21 fish camps from where guests could pursue the quest for trophy largemouth bass. Lake Apopka is connected to a chain of lakes that extends northward  from Orange County into Lake County and eventually connects to the beautiful Oklawaha River.
The sad part of this tale is that in addition to fish camps, Lake Apopka also shared its shores with industry and large farms which contaminated the lake to the point that the aquatic life that once supported the fish camps could no longer survive. And the pollution of Lake Apopka spread through  many of the lakes throughout the chain.
But they are taking efforts to try to clean up the Lake Apopka and the rest of the Harris chain of lakes. Starting in the late '80s, clean-up projects have been under way to reduce the elevated phosphorous levels caused by runoff into the lake. In March, a water treatment facility will begin operation aimed at treating the dirty water. With any luck, maybe the lake will be able to support trophy bass again.
Vintage images are from the archives of the State of Florida
Posted by Rick Kilby at 6:53 AM