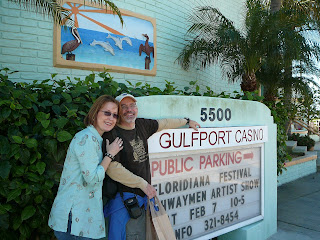 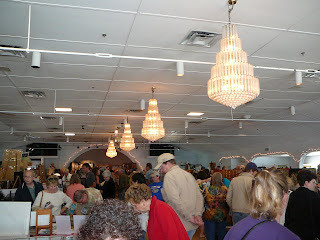 Gulfport, Florida is a suburb of St. Pete originally called Disston City after Florida's first land baron, Hamilton Disston. At one point, Disston owned enough land in Florida to make him the largest single landowner in the world. A typical Florida boom-to-bust story, Disston was found dead in a bathtub in 1896 and his family allowed his Florida lands to be foreclosed on.
Interestingly enough, the organizers of the Floridiana Festival chose Gulfport as the site of their big event. The Festival was held this past weekend in the Gulfport Casino right on the Boca Siega Bay. This historic structure is half ballroom, half gymnasium with a bar in front. Booths of great Florida kitsch and ephemera crowded the wooden floors and several Florida Highwaymen sold their paintings to energized patrons. I was pleasantly surprised at how many people seem to be collecting memorabilia from the Sunshine State and they appeared to be very serious about it, going through every box of postcards and looking at every Hawaiian shirt. There were books on Florida, old travel brochures, china, lamps and contemporary products made in the spirit of vintage Florida. Ambiance was added by the Florida Citrus Queen, aka Bre-elle from Winter Park, and the mood was set by an exotica soundtrack by Martin Denny playing in the background.
I resisted purchasing my favorite item, a $250 alligator lamp, and stuck to small paper ephemera and got some good deals spending less than $20 total. The biggest thing I came away with was a sense of validation that there were others like me who were mesmerized by our state's history and colorful past. 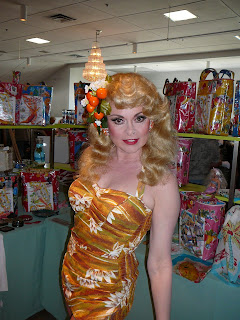