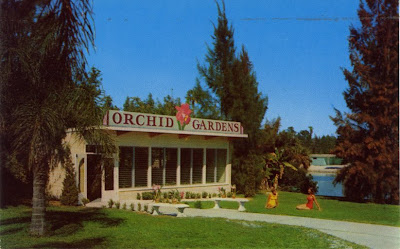 I noticed a small article in today's paper about the American Orchid Society headquarters in Delray Beach, FL closing their greenhouses to the public due to the economy. Florida has a history of orchid-themed attractions going back to the Orchid Jungle that opened in 1925 near Homestead. After being pummeled by Hurricane Andrew, the attraction closed in 1994. In 1998, Miami Dade County's Environmentally Endangered Lands program purchased much of the property with intentions of re-opening it to the public. It is now known as Hattie Bauer Hammock. 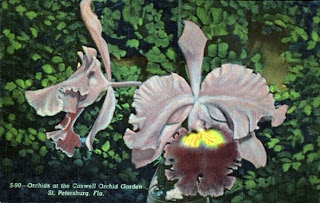 There was also a mom and pop attraction in St. Pete called Caswell's Orchid Gardens, according to Ken Breslauer in Roadside Paradise. Breslauer states "a majority of Florida's prominent early tourist sites came in the form of garden attractions." My 1995 map lists "Orchid Garden" in Winter Park as an attraction at Mead Botanical Garden.

Weeki Wachee was at one time home to an Orchid Gardens (top image), but as near as I can tell they are no longer part of what is now a Florida State Park. And these vintage postcards show orchids as part of the collections at McKee Jungle Gardens and Cypress Gardens (below). It is likely that they were featured flowers at many of Florida's botanical themed attractions from Sarasota Jungle Gardens to Everglades Tropical Gardens. And according to my friends at Vintage Roadside, the roadside attraction near Daytona Beach known as the Atomic Tunnel boasted of an orchid room where you could meet a beautiful orchid queen. 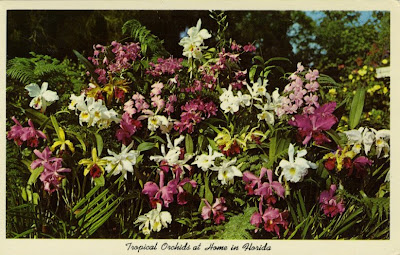 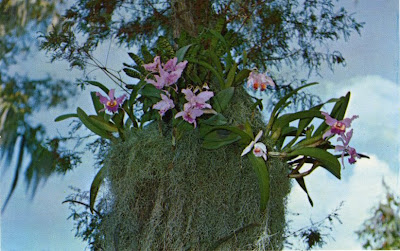 Keeping the long-standing tradition alive, Central Florida has its own orchid-themed attraction called A World of Orchids in Kissimmee. According to the Florida State Park website, the Fakahatchee Strand State Preserve "is the orchid and bromeliad capital of the continent with 44 native orchids and 14 native bromeliad species." And finally Orchid, FL, population 140, is made up of mostly of a gated community called Orchid Island Golf and Beach Club. I'm sure you can find lots of orchids there too.
Posted by Rick Kilby at 6:22 AM