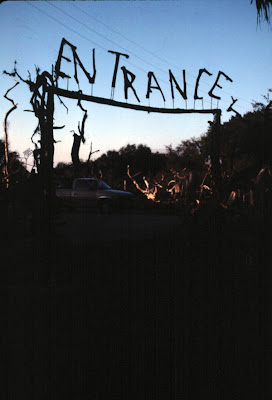 In my quest to visit all the old roadside attractions of Florida, I'm always looking for resources to help guide my explorations. My friends at Vintage Roadside provided me with such a tool by telling me about a great little book called Roadside Paradise The Golden Age of Florida's Tourist Attractions 1929-71. It is self published so copies are not easy to come by, but I borrowed one from a friend. The book was written by Ken Breslauer who at time of publication in 2000 was publicist and historian for the racetrack in Sebring, Florida.
It is similar to the recently published Selling the Sunshine State, in that most of the images are vintage travel brochures and advertising from old attractions. But if anything, the list of "tourist traps" seems more comprehensive, describing propities that were only open for a couple years. I've only skimmed the book but here are some quick observations:
• One of the attractions that has closed since publication is the Cypress Tree Museum in Palmdale, FL. Here's a great little video on the subject.
• One that has re-opened is McKee Jungle Gardens. Although it is not the size of the original  attraction on US 1, there is still plenty to see there.
• Several short-lived attractions I'd never heard of before include: Ancient America in Boca Raton, Chimp Farm in Dania, Coppinger's Pirate's Cove in Miami, Dupree Gardens in Tampa, Eagle's Nest in Belleair, Floating Islands in McIntosh, Lost Lake and Caverns in Miami, Marine Arena in Madiera Beach, Phosphate Valley Exposition in Bartow, Pirate's World in Dania, Rainforest in Sumpterville, Seville Peacock Farm in Clearwater, Sea Zoo in Daytona and Sunshine Springs and Gardens in Sarasota. Most of these were open less than five years. Most of these can also be seen on the Lost Parks website.
• There are 130 attractions listed in the index
Image of the Cypress Knee Museum from the State Archives of Florida
Posted by Rick Kilby at 5:58 AM